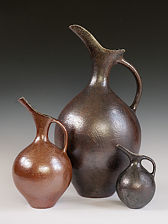 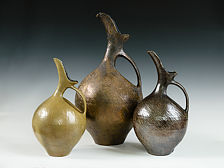 ‘Terrain’ refers to the major exhibition which was staged at Truro Museum between 26th September 2014 and 28th February 2015. The focus of the exhibition was the geology and geography of Cornwall.

Paul’s group of pots celebrates the moorland, particularly Bodmin Moor, an ancient but man-made landscape. He has used fine stoneware clays from John Dobles quarry near St Agnes. Paul says: “By adding his fire clays I am able to strengthen the colours in firing.”

The kiln is fired using waste wood from a local plantation which within 14 hours reaches 1,270°C and allows a two hour soak. The wood ash and the salt interact in the kiln in an alchemistic way so typical of the saltglaze process. The use of tin, iron, copper and manganese, all oxides once mined in Cornwall, as well as the silicas from Cornish stone, interact with the sodium vapours from the salt, creating the surface of the pots.

China clay, an essential part of all clay bodies and the glazes, is still being mined in Cornwall today.