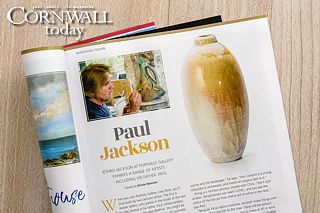 There’s an article about Paul in this month’s issue of Cornwall Today magazine.

From Saturday 5th October some of Paul’s work will be on show at Henry Paddon Contemporary Art in Eastbourne. The exhibition runs until October 26th.

“At last I am seeing the fruits of my labours. Although not quite the five different greens yet, but the Oribe glaze fired in the wood kiln is looking beautiful as it drifts between soft green and pink. The small plates are in celadon and the magnificent dark green – almost black – large plates are wonderful. The next step is to find a moss green for the next group of bowls.”

The dinner service phase one. 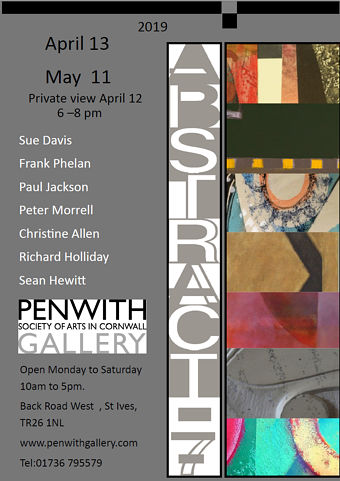 In Spring of this year Paul will be exhibiting with the other members of the Abstract 7 Group: Sue Davis, Frank Phelan, Peter Morrell, Christine Allen, Richard Holliday and Sean Hewitt.

Paul is currently working on a dinner service for thirty people for Rick Stein trained chef Matthew Dorich. His company Matthew’s Kitchen produces tailor-made menus for lunches or dinner parties in your own home.

The dinner service under construction. 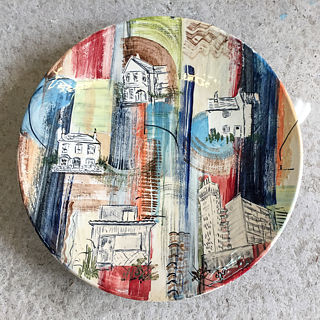 This large, decorative plate was commissioned for photographic agent Tom Gildon by his parents for his 40th birthday. Paul met Tom’s parents on a recent trip to Australia at Circular Quay, Sydney. They sent photos of five places that Tom had lived in that are important to him plus an image of his favourite rug, which formed the basis of the design. The houses included Trellick Tower and his new courtyard house designed by architects Dallas Pierce Quintero. 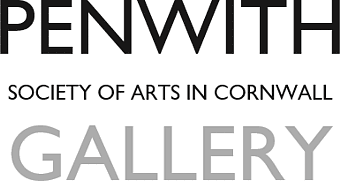 Paul Made Full Member of the Penwith Society12 December 2017

In December 2017 Paul was made a full member of the Penwith Society. The Penwith is a society of exhibiting artists and has a unique complex of buildings, including public galleries, artist studios and workshops. The Penwith Society was founded in 1949 by a group of artists in St Ives, under the distinguished leadership of Ben Nicholson, Barbara Hepworth and Bernard Leach. 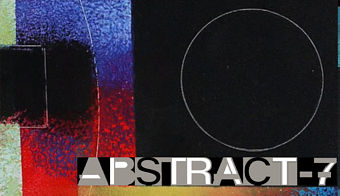 In October Paul will be exhibiting at the Penwith Gallery in St Ives as part of the Abstract 7 Group.

The Abstract 7 are a group of five painters one potter and one sculptor, all of whom favour the modernist’s approach and a philosophy of abstraction that echoes the appreciation of the New York abstract expressionists. The group launched their first exhibition as ‘Abstract 7’ at the Penwith Gallery where Ben Nicholson and Barbara Hepworth first made a stand for abstraction in England.

Early in the morning of Sunday 4th of June the weather wasn’t promising, but by 2.00pm the sun had come out and nearly 200 people came to Rosie’s open garden. The volunteers were kept busy all afternoon making tea and serving cakes. Altogether nearly £2,000 was raised for the British Red Cross (for which Rosie is the president of the Cornwall branch).

Endelienta are proud to show this exhibition of ceramics by Paul Jackson, one of the country’s top ceramicists. In response to Endelienta’s work in the North Cornwall region Paul has created a series of bowls taking the ancient fonts from local churches as inspiration. 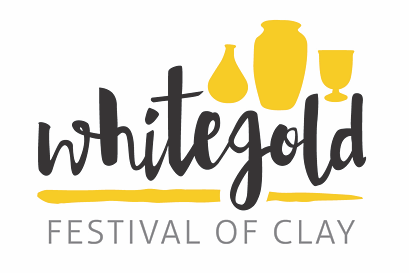 WhiteGold: A Festival of Clay1 October 2016

As part of WhiteGold: A Festival of Clay I was invited to work in White River Square, St Austell and to engage with the public. I wanted to use the day to talk about the bigger project and chose the adoption of the Eucryphia tree which flowers white in August around the church. It has become the symbol of China Clay and the greening of the town. A Eucryphia trail is being planned.

On the day I made a white stand using de-barked hazel and limbs of dead oak. The oak was whitened with China Clay. The hazel was set into blocks of white clay.

Families and individuals were invited to make flowers and these were placed onto the skeletal branches. Over the course of the day the work built to form a Japanese-like installation, which dried and whitened to become ethereal.

I loved working outside my normal realm.

This year will be the last ever Art in Action at Waterperry in Oxfordshire. It’s been a privilege to have been demonstrator there for the previous 8 years. It’s a great sadness that this is the last one. Let’s make it the best ever. 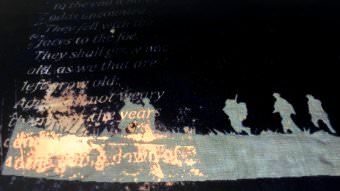 I have now completed the piece for the First World War Centenary Exhibition at Trelissick House and will be on show with 26 other Cornwall Craft Association Members until 31st July. This was a first for me. Craftsman turned Artist, the installation is the culmination of a year’s research into the role my grandfather played at Paschendale in July 1916.

Paul will be featured in Seasalt Cornwall’s autumn catalogue.
Click on this link to see a PDF of his double-page spread. 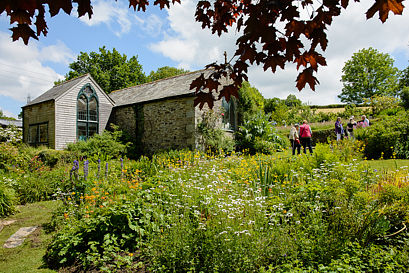 On Sunday 14th of June Paul and Rosie raised over £2,500 for the British Red Cross (for which Rosie is the president of the Cornwall branch). The garden was full of people wandering in and out of the vibrant herbaceous borders and luscious water gardens along the river, and enjoying the newly extended river walk. Cream teas and homemade cakes were in plentiful supply and there were a variety of stalls, including Barbara Norman’s plants and Emily Nott-Bower’s jewellery. There was also live music and a Punch and Judy show for the children. 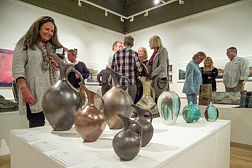 Tonight was the private view for the Terrain exhibition at the Royal Cornwall Museum in Truro. The exhibition features the work of four artisits working in Cornwall, Paul, scuptural ceramicist Jenny Beavan, painter Lar Cann, and photographer Adam Pedley. The exhibition (which is on until 27 February 2015) explores the landscape and geology of Cornwall through their eyes.

Paul’s group of pots celebrates the moorland, particularly Bodmin Moor, an ancient but man-made landscape. He has used fine stoneware clays from John Dobles quarry near St Agnes. The kiln is fired using waste wood from a local plantation which within 14 hours reaches 1,270°C and allows a two hour soak. The wood ash and the salt interact in the kiln in an alchemistic way so typical of the saltglaze process. The use of tin, iron, copper and manganese, all oxides once mined in Cornwall, as well as the silicas from Cornish stone, ineract with the sodium vapours from the salt, creating the surface of the pots.

Paul and Jethro are sharing the Porthilly Gallery exhibition at the Rock Institute.

At the beginning of December Paul had some pots on show at a pop-up gallery just off Brick Lane in London’s East End. The show, which featured Robin Leonard, Trevor Tucker and Chris Prindl as well as Paul, was organised by Leonard’s Art Exhibitions. 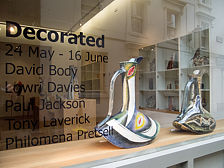 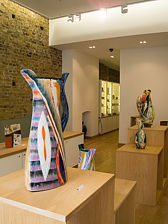 Some of Paul’s large pots are on show this week at the Contemporary Ceramics Centre in Great Russell Street (opposite the British Museum). The exhibition ‘Decorated’ is a joint show that also features the work of four other studio potters.

You’ll have to hurry if you want to see the pots as the exhibition finishes on Saturday 16th June.

The Cornwall Crafts Association are pleased to announce the prestigious fair at Xmas: "SHINE".

Following on the success of the 2009 event Shine will feature 40 top crafts people. Set in the beautiful grounds of Trelowarren, in a fully heated marquee next to the Gallery, the fair will include demonstrations as well as a unique chance to meet the makers.

Hackwood Art Festival will take place at Huish House this year on 24-26 June and I am very pleased to have been asked to participate.

I will be showing 6 major pieces including one of the extra large rocking jugs and a large globe vase from the Salt Glaze kiln with life drawing.

I will be at the Thursday evening opening on 23 June and I do hope that I’ll see you there.

I am pleased to announce that as of the 7th May, I took over as Chairman of the Cornwall Crafts Association. I have been a member for the last 30 years and enjoyed showing my work at their galleries at Trelowarren and Trelissick.

In 2009 I was invited to stage a one-man show at Trelowarren and where I introduced the new Salt Glaze range. I shall be a ‘Focused Artist’ in 2012 (the date to be confirmed). Meanwhile please look out for new pots at Trelissick.

If anyone is interested or has any inquiries about the CCA please give me a call. 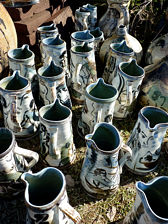 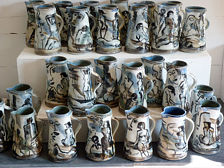 Paul has just delivered his first batch of water jugs to Rick Stein’s Seafood Restaurant. It was a very successful firing for the jugs, which are made out of porcelain for toughness, reaching a record temperature for the wood kiln of 1,282°C.

The design on the pots is a collaboration between Paul and Rick as Rick wanted the dream faces on the pots to have a connection with the paintings of people which proliferate on the walls of the restaurant. 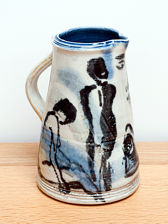 Paul Jackson has been commissioned by Rick Stein to produce a series of water jugs that will be used in the Seafood Restaurant. They will also be on sale at the restaurant and his shops. 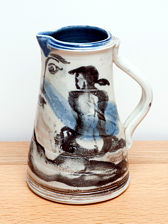 “The jugs are made of porcelain, which has been fired to 1,270°C in a wood fueled kiln to which salt has been added. The wood ash and the salt form a vapour glaze that is second to none in strength and durability. Subtle colours are developed as the metals in the decoration are fused and softened.

“The life drawings are from my private collection, carried out during the winter months and used to create a unique group of designs. 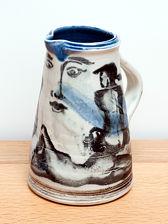 “I am proud to produce this group of jugs for the Seafood Restaurant. They represent a taste of Cornish art to compliment the existing art.

“Most exciting is that the production is as ‘green’ as possible, using Cornish china clay and fired with wood from a local plantation.

“I have been working at Helland Bridge for over 31 years. The coast and moorland of the county have been hugely influential in both design and material choices. This brings together many of my goals in one of the most exciting projects to date.”